Anyone who uses Google Plus knows that the network is overrun with spam. It is unfortunate but there seems to be almost no policing of the network. In fact, many accounts are followed by as much as 99% fake followers. I get circled 5-10 times a day by all sorts of random “people”. I know NONE of them. I am not in a shared circle of any type. They just…. Find me. I have 4,000 “followers”, but the real # is probably closer to 100. If you have 100 followers on Google+ you are doing pretty good. I don’t know anyone on the network with 100 real, active, followers, other than Beyonce.

Many of these accounts are very weird. They send you messages but do not drop links. They just sort of…. Exist.

In April of 2015 myself and many others began getting messaged several times a day by accounts with random names and pictures. I had 10-15 of the fake accounts message me today alone. 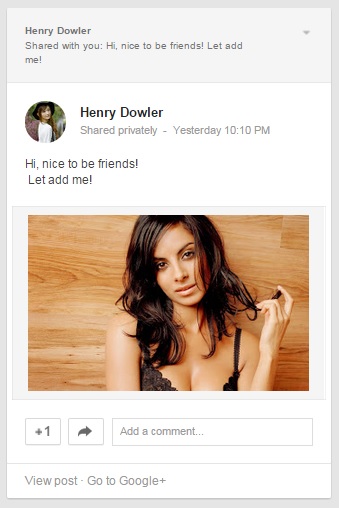 Every message is the same:

Hi, nice to be friends!

Weird. This is a random guess but I do believe that well over 99% of the accounts on this network are fake.

← Google Plus Announces Pinned Posts, But They Don’t Work on Mobile
Google Plus Tweets →